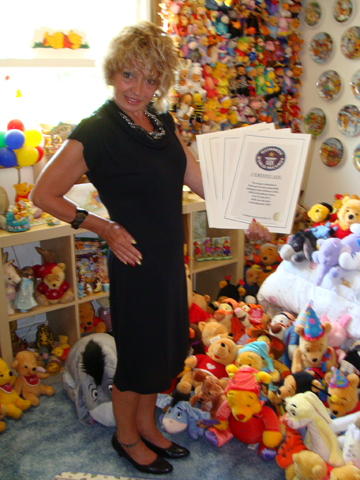 Town of Vernon, Wis. - Deb Hoffmann, recognized by the Guinness Book of World Records since 2010 for "Largest Collection of Winnie the Pooh Memorabilia," has hit 10,000 items in her collection of the lovable, do-anything-for-honey bear.

Hoffmann, a collector of all things Pooh for 25 years, is preparing submission materials for the 2015 Guinness tome. The landmark 10,000th item was a passport cover donated by a Toronto couple whom she met at Winnie's Hometown Festival in White River, Ontario. Hoffmann has served as master of ceremonies for the annual event, which brings together thousands of Pooh aficionados.

The 10,000th item was symbolic, Hoffmann said. The bear that inspired the Winnie the Pooh character was born near White River, and taken to England. The animal lived much of its life in the London Zoo, where it was a favorite of author A.A. Milne and his son, Christopher Robin. Milne, of course, wrote many children's stories featuring Pooh.

Hoffmann's collection fills three rooms at the town of Vernon home she shares with her husband, Gary. They built an additional closet to store Pooh sweatshirts and jackets. Pooh memorabilia appears throughout the house on curios and bookshelves.

"When you collect, there's always something more to find," said Hoffmann, 48, who owns several businesses with her husband. "It's definitely a hobby – just one that takes up a lot of space." She estimates they've spent more than $80,000 on her world record collection.

The tiniest item in Hoffmann's Pooh collection is a gold charm smaller than a dime. The largest is a 6-foot costume dating back 50 years. Stuffed animals and clothing are the most common.

The 2010 Guinness Book of World Records featured a centerfold picture of Hoffmann lying among hundreds of stuffed Poohs. She's wearing – what else? – Pooh pajamas.

None of the more than 10,000 items in Hoffmann's Pooh collection are duplicative. The chief target of her current searches is a Pooh costume used in the 1980s. She knows it's out there. Eventually it will be part of her record, which shows no sign of slowing anytime soon.