(using the same inflection and British accent as "The Narrator" is described in the stories...) 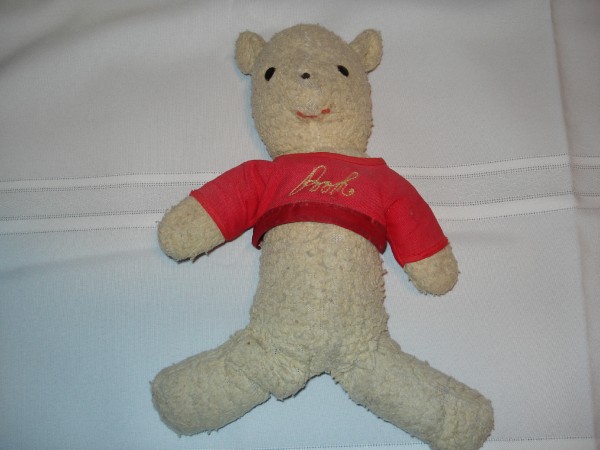 Many people ask me "when" the obsession started and "why" I have such an obsession with Winnie-the-Pooh.  I think I can answer the "when" part with a story I wrote for a project called, "Pooh on the Toilet".  I am not sure EVEN I KNOW the "why" answer.

the story I wrote in 6th grade goes like this

..... Almost every night I would get up to see my dad who came home from work very late. I used the excuse I had to go to the bathroom so I could get up. That night was no different

It was eleven-thirty and my dad was home any minute. I quietly sneaked out of bed and into the bathroom. In a minute or so, my dad came home. He had a box with him. My mom put it in the bathroom where I could reach it. Picking it up, I reached inside. In there sat a Winnie-the-Pooh bear. He had warm orange fur and a bright red shirt with the letters P-O-O-H embroidered on the front in gold.

The moment I saw Pooh I fell in love with him. He became my best very friend.....

And for me, the rest is history.  I wrote the story when I was in sixth grade.  The story, however, was about an incident that happened when I was two years old.  I still have that very first Pooh - he sits on my bed always (and yes, I have a very patient, loving husband).  Over the years he has been loved so much you can hardly tell he is a Pooh.

I always loved Pooh over the years and probably until I was 20 I had 40-50 Pooh and Friends items.  But at 22 I got married to a wonderful and patient man - Gary, I started a full-time job which gave me some disposable income. Then I'd say the obsession started again.  I started to notice Pooh items again – ornaments, figurines, Pooh dressed in costumes ... one was cuter than the next.  Those who know me know I have of an personality – I don't "do" anything in a small way.  So when I saw a cute Pooh – I bought them – ALL OF THEM.

But in my defense, my collection has had help.  When people find out you collect something, you tend to get gifts of that item for Christmas, birthdays, Valentine's Day, Easter NOT that I mind at all.

Before Sears lost their exclusive contract to sell Winnie-the-Pooh merchandise, I played the Pooh character that would greet kids in the children's department.  I didn't work for Sears – I just went into a local Sears and asked if I could help out with the character the next time they had an appearance.  Much to my they took me up on the offer.

The person who usually played Pooh didn't like how hot it got in the costume.  For me, I loved every moment of being able to share Pooh with kids who came to the store.  With all the violence on TV – even in cartoons, I hoped that the kids I met would also grow up loving Winnie. 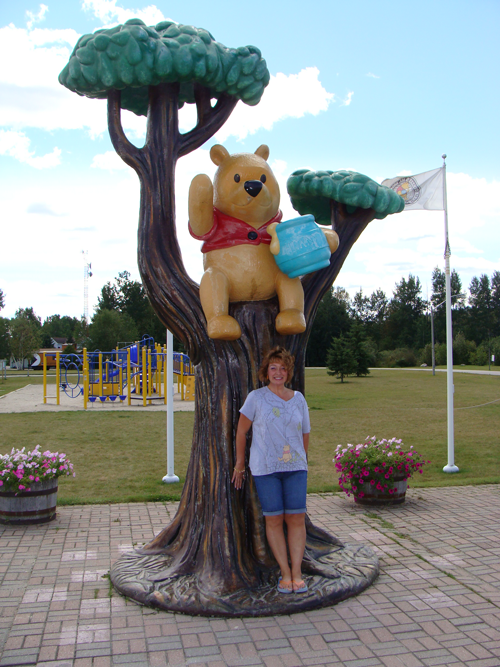 There was probably another turning point - it starts to answer the "why" do I love Winnie-the-Pooh.

Somehow I found a newsletter that advertised Pooh items for sale by private owners (this was before the internet).  It was kind of a paper eBay for just Pooh items.

In the there was an article for a festival in the Hometown of Winnie.  I didn't know that the story of Pooh really started in a Canadian town called White River.  Gary and I decided to do a one-time road-trip to White River which has now turned into an annual event.  We have made friends with a good portion of the town – We met several wonderful friends who we absolutely cherish. 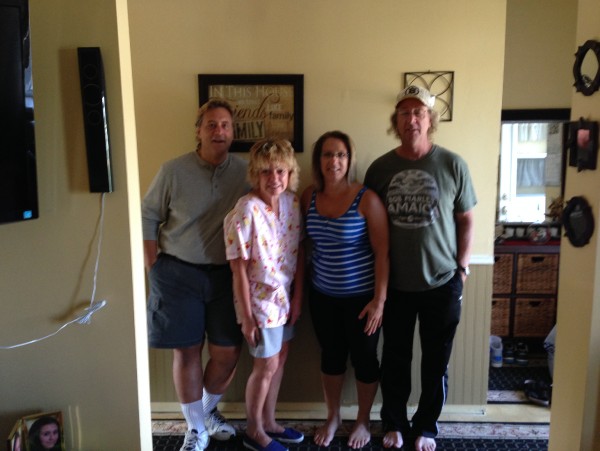 The last few years I have been honored to be the Master of Ceremonies for the weekend festival.  To Pooh helped bring many wonderful people into my life.  It was out of the innocence of the Pooh road trip that now we have friends we call our best friends.

If you examine the characters in the Pooh stories it is very clear A.A. Milne gave each character a personality of a type of person you will meet in life.  Pooh is the naive, friendly sort who just enjoys life.  Piglet is insecure and afraid to try new and different things – tell me we don't meet a lot of that type of person. Tigger is your loud friend who means well but frequently goes overboard.

I guess the stories of Pooh help me to put the "whys" of life in order in a "friendly sort of way".

Lots of people think my obsession is fun – others wonder when I will grow up.  I've decided that while I am still having fun and collecting Pooh makes me happy – I will NEVER grow up.  Maybe if others had an obsession that made them smile and take themselves a little less seriously we'd all be a little happier.