link to the article 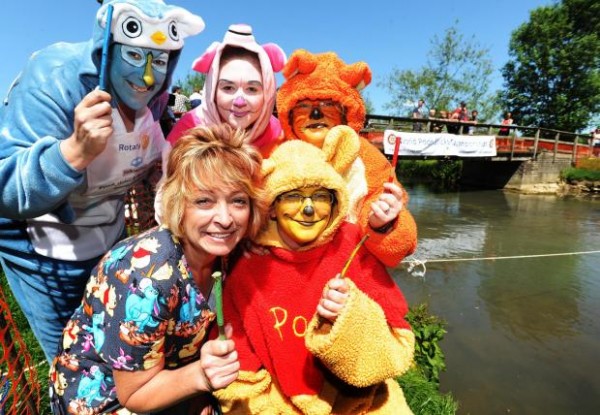 THE organisers of Oxfordshire's World Poohsticks Championships have won a national award for their campaign to find it a new home.

The Rotary Club of Oxford Spires said it was "delighted" to be awarded the Rotary in Great Britain and Ireland (RIBI) Public Relations Trophy for 2016.

Judges handed the gong to award to marketing officer Lesley Adams whose campaign garnered national media attention as well as the support of the Oxford Mail.

Her PR crusade, which eventually found the contest a new home in West Oxfordshire, even attracted the attention of the Prime Minister.

Ms Adams said: "We had some great publicity in 2015, especially for Poohsticks.

"To see the David Cameron asked about the event coming to his constituency on the news was great fun.

"Clare Balding also mentioned us on several occasions during her Sunday morning shows on Radio 2: the local and national media have been so supportive of our club and its events and I would like to thank them on behalf of all our members and those charities that benefit from the funds we raise."

For 31 years the annual Poohsticks championships, inspired by AA Milne's Winnie the Pooh, attracted thousands of people to Day's Lock at Little Wittenham, near Didcot.

Up to 700 competitors made the pilgrimage each year to drop coloured sticks off a bridge into the Thames and race them to the other side.

Ms Adams put out an appeal seeking a large bit of land with a little river and lots of parking, hoping they would find somewhere suitable in Oxfordshire but warning that they may be forced to leave the county to keep the event running.

The appeal was picked up by the Oxford Mail and other media and within months, the owners of Langel Common in Witney had offered their land.

Not only had the competition found a new home in Oxfordshire, but the new location on the Windrush rather than the Thames meant it could be held in the summer for the first time because it would not be interfering with boating traffic.

The inaugural West Oxfordshire championships on Sunday, June 7, won so much media attention that it even attracted the owner of the world's largest collection of Winnie the Pooh memorabilia, Deb Hoffmann, of Wisconsin, USA, who flew over just to take part.

Preparations are now well underway for this year's championships which will be held on Langel Common on Sunday, June 5.

Keep up to date with all Poohsticks news at pooh-sticks.com

By Pete Hughes
Reporter covering Abingdon and Wantage, South Oxford and Kennington.
Call me on 01865 425431