The History of Winnie the Pooh 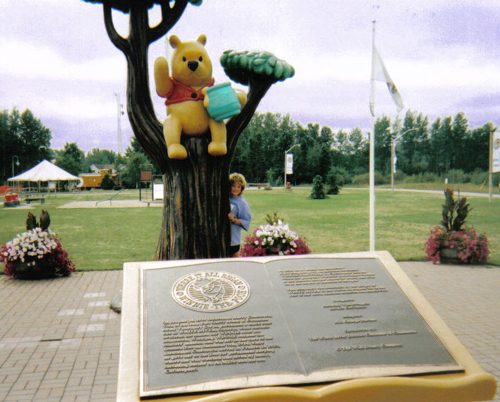 Most people have the misconception that the story of Winnie the Pooh started in England.

When I tell them, "No, he really originated in Canada", I usually get a most suprised look.

It Started a Phenomonon

Little did the community of White River, Ontario, Canada, know that in 1914 there would be "an incident" that would start a phenomonon that would be known the world round.  The simple sale of a bear cub would cause the inspiration of author A.A. Milne to subsequently write one of the most loved bear stories in the world. 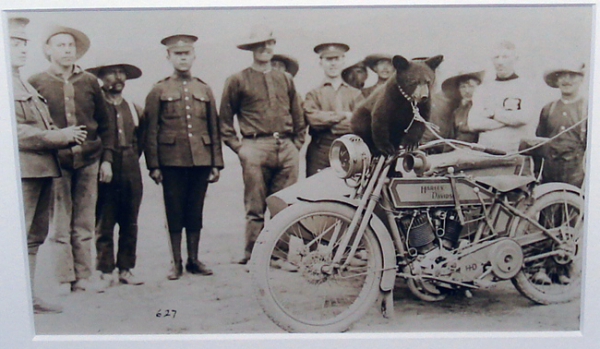 There was a little black bear cub that became an orphan when a hunter killed her mother. Yes, that is right, Pooh was a "she" and didn't originally wear a red shirt.

She was found by trapper, George Cooke, who brought her into the town of White River, which was a fairly common thing to do in 1914. Several people had bears then. Some have photos showing pet bears leashed and posing with family members.

White River, which was founded by the Canadian Pacific Railway back in 1885, was an important stop for all trains.  Here they would take on coal and water as well as doing some train housekeeping jobs, such as cleaning out the cinders. During the First World War, most trains carrying troops also carried horses, since they were used in the war. Trains would stop here from four to six hours. The horses were taken off the train to be watered and exercised.  Troops were drilled along Winnipeg Street where the Train Station was located.  It was here at the Train Station, that the trapper sold the bear cub to a soldier during a stopover. The soldier was Lieutenant Harry Colebourn. An entry in his journal reads, "August 24, 1914 Left Port Arthur 7AM. In train all day. Bought bear $20". A later notation identifies the town as White River.  (Pooh's birthday is considered to be August 24th and is why "Winnie's Hometown Festival" is always celebrated the third weekend of August in White River.)

Harry called the little cub "Winnipeg" after his hometown. This little bear, known as "Winnie" became a pet for the soldiers, sleeping under the cot of her master even after they reached the Salisbury Plains in England. As Winnie got bigger, she loved to climb the centre pole in the soldier's tent and give it a shake. It was becoming a concern that the tent might collapse during the night, so she was tethered to a pole outside the tent.

Harry Colebourn was now a Captain. In 1914 he received the news that he would soon be shipped to France. He knew that Winnie would not be able to accompany him, so he made arrangements to keep her in the London Zoo until he returned. Winnie soon became a favorite aninal attraction. People would knock on her door and she would open it and come out. She would allow children to ride on her back and she would eat from their hands. The attendants who cared for her stated that Winnie was completely trustworthy and compared, to other bears, was allowed to have a close relationship with guests.

Captain Colebourn visited Winnie at the Zoo whenever he was on leave. He always recorded his visits in his diary.  When Harry saw how popular she was with the children and adults, he decided he would not take her back to Canada as he had planned. She was officially donated to the Zoo on December 1, 1918.

This little bear captured the hearts of many guest to the Zoo.  As fate would have it, among Winnie's fans were A.A. Milne and his son Christopher Robin. The two became regular visitors and it was Christopher Robin who added "Pooh" to Winnie's name. He got the name from the swan, Pooh, who lived in his backyard at Cotchford Farms. Christopher had a bear given to him on his first birthday on August 21, 1921 which he first called Edward Bear, but soon changed to "Winnie-the-Pooh" after the playful Winnie at the London Zoo.

A.A. Milne started to write stories about a loveable bear in his children's books based on that bear in the Zoo. In his first edition in 1926, he mentioned that these stories were about this bear and his son and his son's stuffed animals. We have been told that Christopher Robin had a birthday party at the Zoo that included some of his friends and "Winnie-the-Pooh" as well, since it was held in Winnie's den.

Winnie lived a long, full life in the zoo. She died on May 12, 1934 when she was 20 years old. She was so loved by all that the London Newspaper ran her obituary.